Running R from your computer

Download this data and put it in a folder named “data” in your project root:

We’re interested in the perennial econometrics question of whether an extra year of education causes increased wages. In this example we use simulated/fake data that includes the following variables:

If we could actually measure ability, we could estimate this model, which closes the confounding backdoor posed by ability and isolates just the effect of education on wages:

However, in real life we don’t have ability, so we’re stuck with a naive model:

The naive model overestimates the effect of education on wages (12.2 vs. 9.24) because of omitted variable bias. Education suffers from endogeneity—there are things in the model (like ability, hidden in the error term) that are correlated with it. Any estimate we calculate will be wrong and biased because of selection effects or omitted variable bias (all different names for endogeneity).

To be a valid instrument, it must meet three criteria:

We can first test relevance by making a scatterplot and running a model of policy ~ instrument: 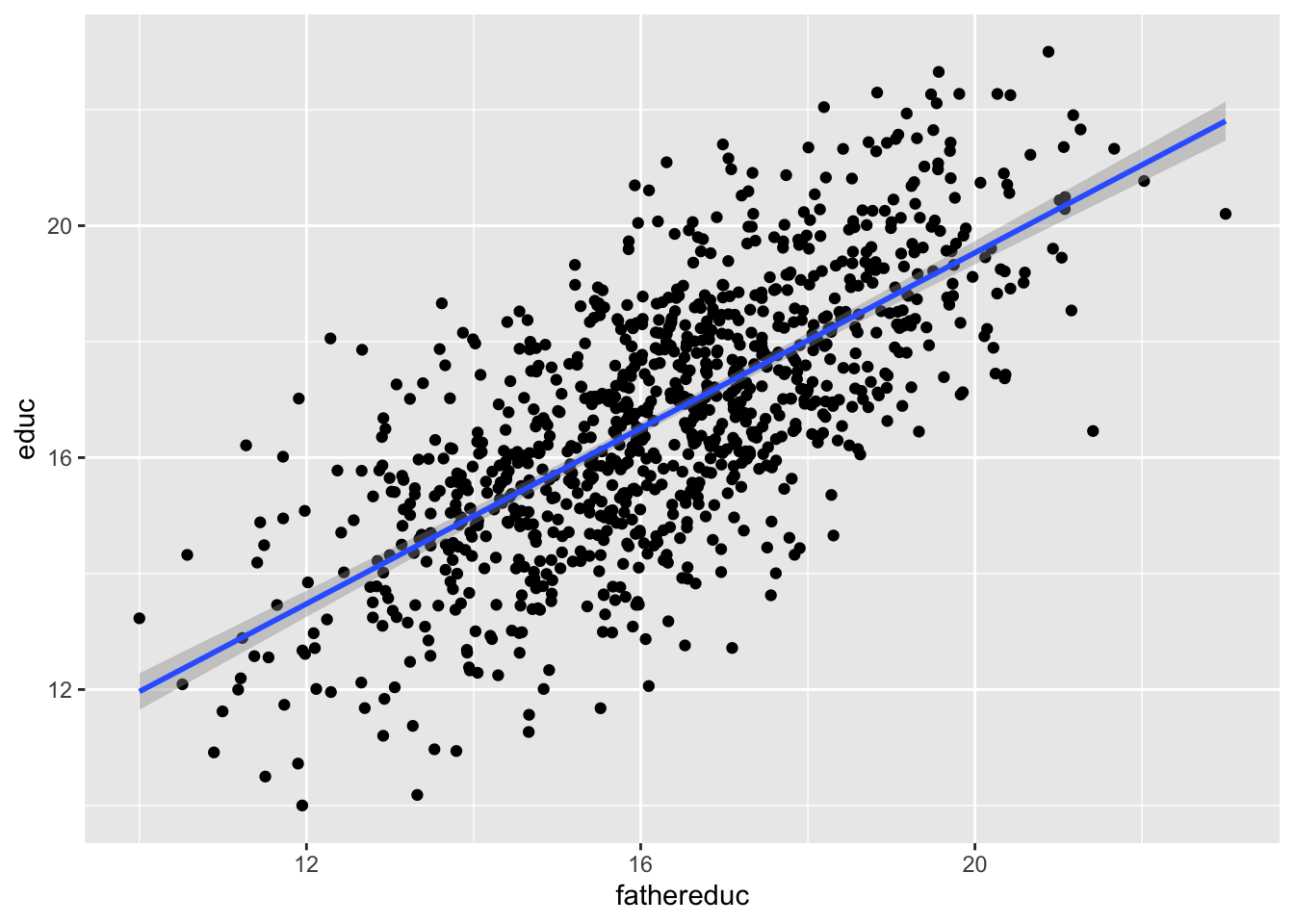 This looks pretty good! The F-statistic is definitely above 10 (it’s 972!), and there’s a significant relationship between the instrument and policy. I’d say that this is relevant.

To check for exclusion, we need to see if there’s a relationship between father’s education and wages that occurs only because of education. If we plot it, we’ll see a relationship: 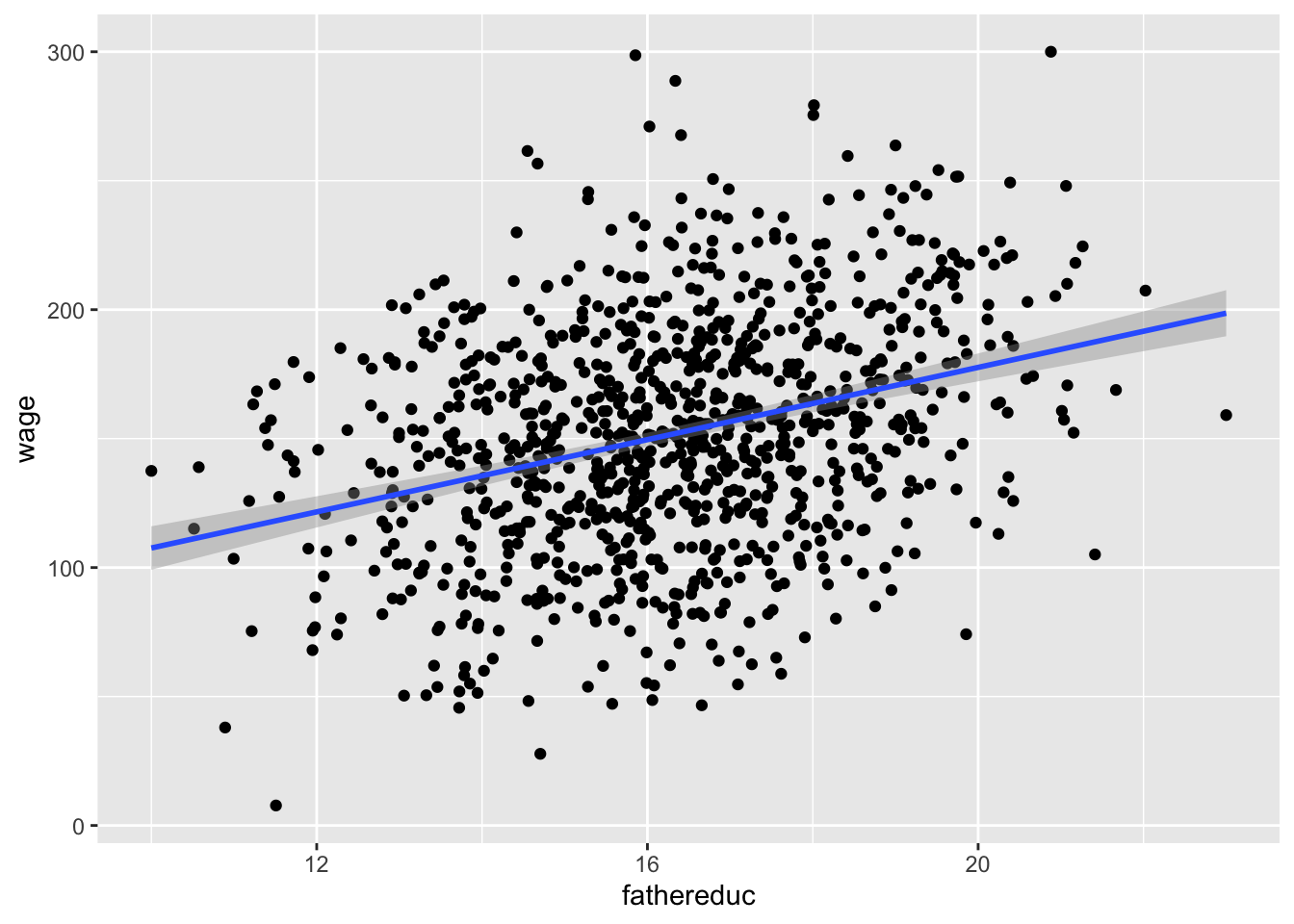 There’s not really a test for exogeneity either, since there’s no way to measure other endogenous variables in the model (that’s the whole reason we’re using IVs in the first place!). Becuase we have the magical ability column in this fake data, we can test it. Father’s education shouldn’t be related to ability: 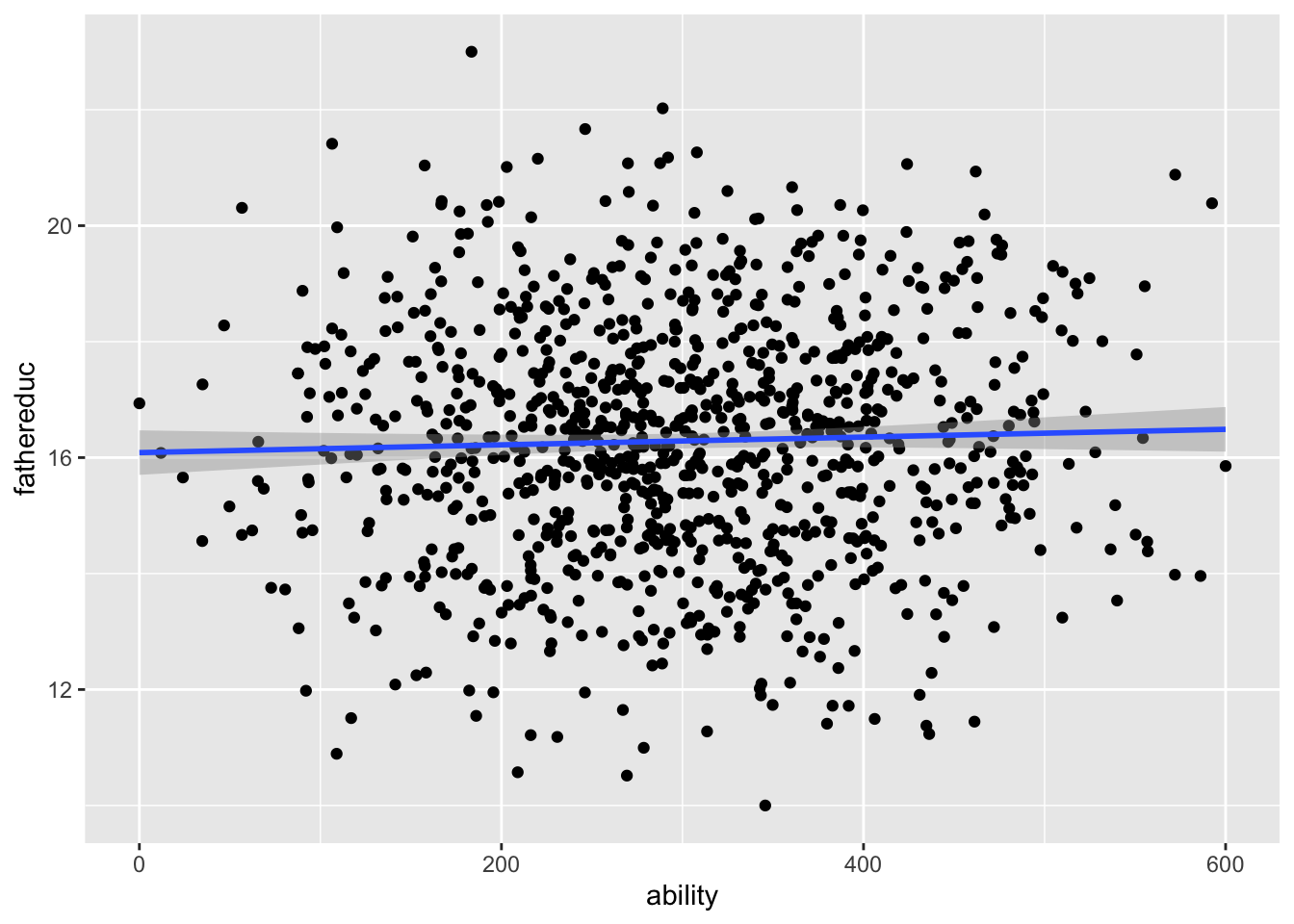 And it’s not! We can safely say that it meets the exclusion assumption.

For the last part—the exogeneity assumption—there’s no statistical test. We just have to tell a theory-based story that the number of years of education one’s father has is not correlated with anything else in the model (including any omitted variables). Good luck with that—it’s probably not a good instrument. This relates to Scott Cunningham’s argument that instruments have to be weird. According to Scott:

Let’s just pretend that father’s education is a valid instrument and move on :)

Now we can do two-stage least squares (2SLS) regressin and use the instrument to filter out the endogenous part of education. The first stage predicts education based on the instrument (we already ran this model earlier when checking for relevance, but we’ll do it again just for fun):

Now we want to add a column of predicted education to our original dataset. The easiest way to do that is with the augment_columns() function from the broom library:

Note a couple of these new columns. .fitted is the fitted/predicted value of education, and it’s the version of education with endogeneity arguably removed. .resid shows how far off the prediction is from educ. The other columns don’t matter so much.

Instead of dealing with weird names like .fitted, I like to rename the fitted variable to something more understandable after I use augment_columns:

We can now use the new educ_hat variable in our second stage model:

The estimate for educ_hat is arguably more accurate now because we’ve used the instrument to remove the endogenous part of education and should only have the exogenous part.

We can put all the models side-by-side to compare them:

This data comes from the wage2 dataset in the wooldridge R package (and it’s real!). Wages are measured in monthly earnings in 1980 dollars.

We want to again estimate the effect of education on wages, but this time we’ll use both one’s father’s education and one’s mother’s education as instruments. Here’s the naive estimation of the relationship, which suffers from endogeneity:

This is wrong though! Education is endogenous to unmeasured things in the model (like ability, which lives in the error term). We can isolate the exogenous part of education with an instrument.

Before doing any 2SLS models, we want to check the validity of the instruments. Remember, for an instrument to be valid, it should meet these criteria:

We can check for relevance by looking at the relationship between the instruments and education: 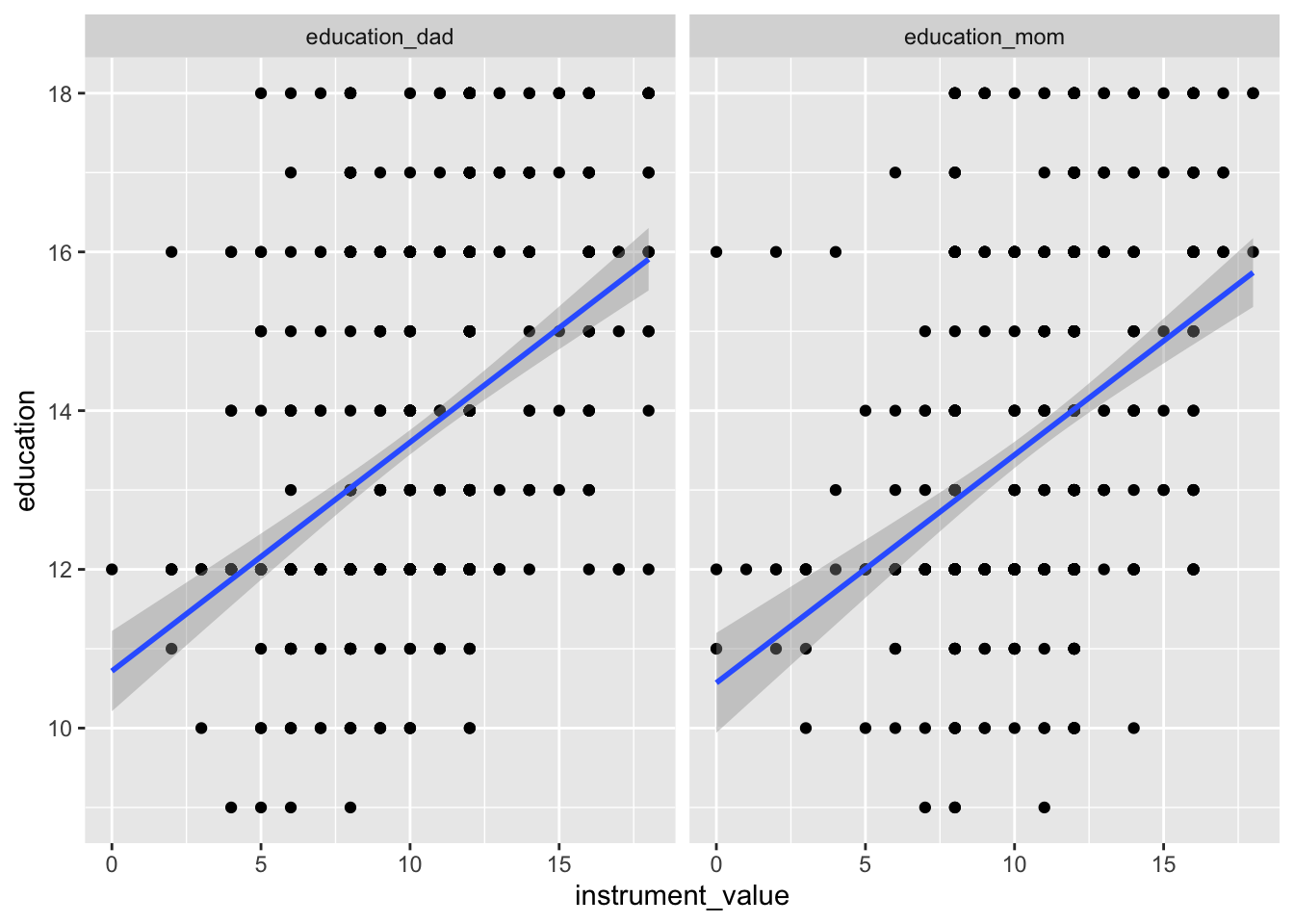 There’s a clear relationship between both of the instruments and education, and the coefficients for each are signficiant. The F-statistic for the model is 83, which is higher than 10, which is a good sign of a strong instrument.

We can check for exclusion in part by looking at the relationship between the instruments and the outcome, or wages. We should see some relationship: 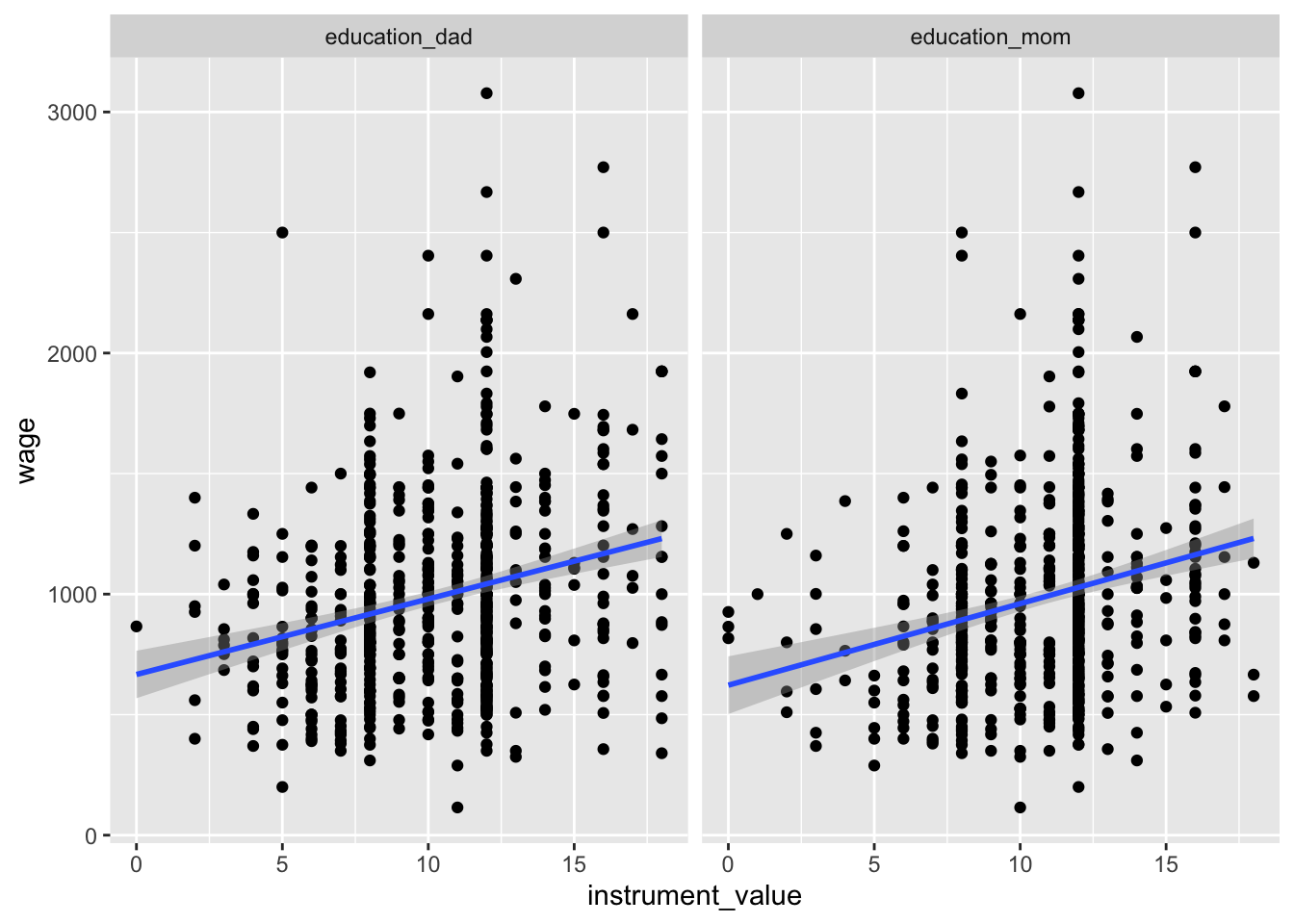 And we do! Now we just have to make the case that the only reason there’s a relationship is that parental education only influences wages through education. Good luck with that.

The last step is to prove exogeneity—that parental education is not correlated with education or wages. Good luck with that too.

We can then extract the predicted education and add it to our main dataset, renaming the .fitted variable to something more useful along the way:

Finally, we can use predicted education to estimate the exogenous effect of education on wages:

That should arguably be our actual effect! Let’s compare it to the naive model:

The 2SLS effect is roughly twice as large and is arguably more accurate, since it has removed the endogeneity from education. An extra year of school leads to an extra $111.56 dollars a month in income (in 1980 dollars).

We should get the same coefficient as the second stage, but the standard errors with iv_robust are more accurate. The only problem with iv_robust is that there’s no way to see the first stage, so if you want to check for relevancy or show the F-test or show the coefficients for the instruments, you’ll have to run a first_stage model on your own.

Models from iv_robust() also work with huxreg(). Note how the education variable isn’t renamed educ_hat in the iv_robust() version—it’s still using predicted education even if it’s not obvious

For this last example we’ll estimate the effect of education on wages using a different instrument—geographic proximity to colleges. This data comes from David Card’s 1995 study where he did the same thing, and it’s available in the wooldridge library as card. You can find a description of all variables here; we’ll use these:

Therefore, he estimates a model where:

Notice how educ_hat and educ are the same in each of the 2SLS models, and they’re higher than the naive uninstrumented model. Because the outcome is log wages, we can say that an extra year of education causes a 15.7% increase in wages.