Open the RStudio.cloud project for today or download the project to your computer, unzip it, and run it locally:

We can check to see how much of an effect the job training program had on 1978 income by looking at the average income in both groups:

But what if we don’t have actual experimental data and are limited to just population data? Suppose we have a big dataset of people’s incomes, and some of them participated in a training program. Let’s check the group differences:

Here it looks like the training program had a substantial negative effect. The average income for people who didn’t receive the training is $21,500, while those who did get the training earn only $6,349.

There’s a confounder here though. The people who willingly participated in the training needed it for whatever reason—they may have been undereducated or undertrained or underexperienced, or something. If we compare this self-selected group to people who didn’t seek out training, we’re not comparing similar groups of people.

If we make a DAG, we can see that we need to adjust for “Needs training” since it’s a backdoor to income 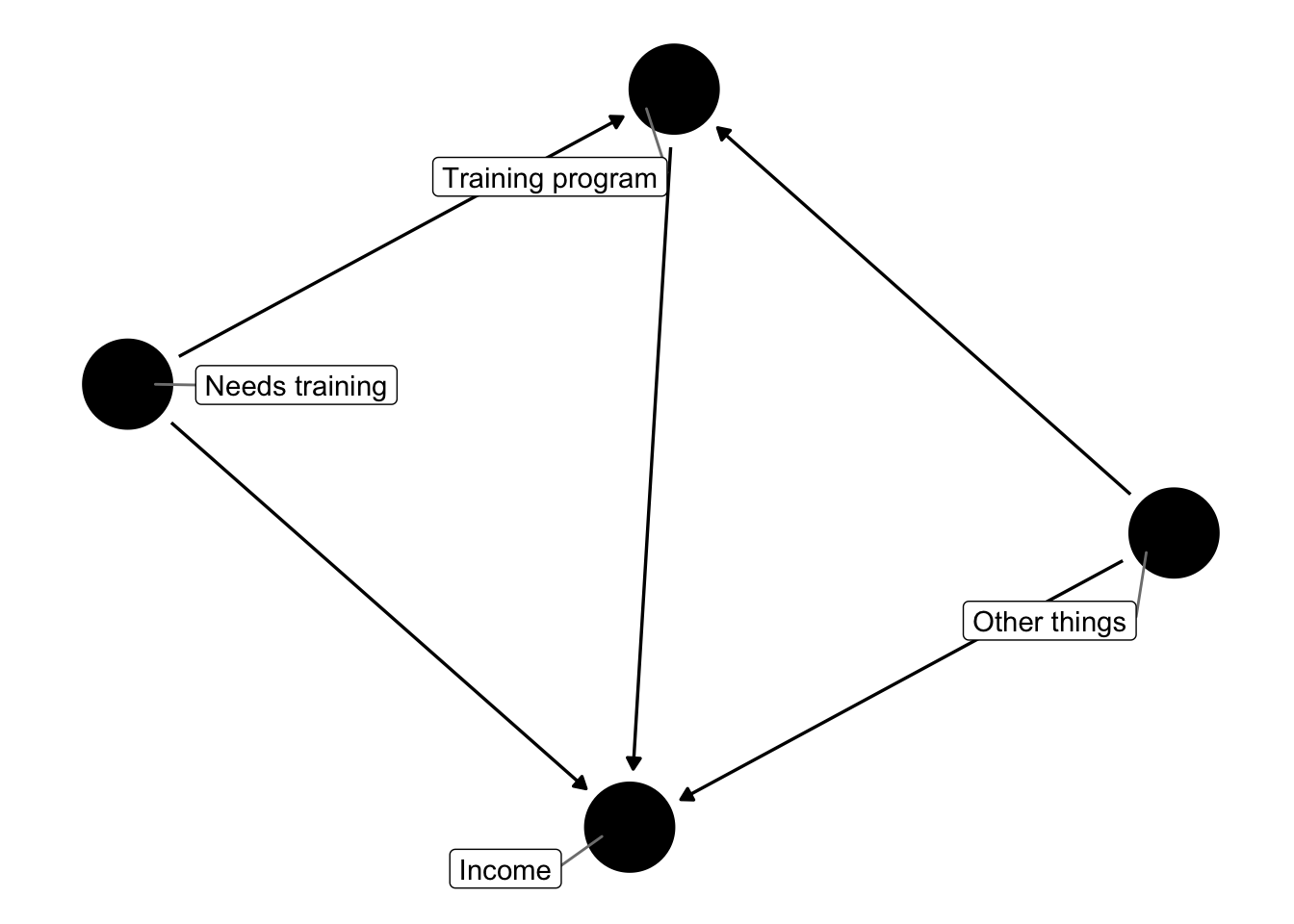 We don’t have a variable in our dataset named “Needs training,” but we can infer the need for training from pre-training income (like income in 1975 before the training program was offered).

Let’s look at the 1975 incomes of people in the experiment and the general population:

Those who participated in the experiment are much poorer on average than the total population, so we can infer that people in the regular world who have low incomes would need the job training.

We can adjust for “needs training” by limiting our sample of the full population to only those who have incomes below some threshold. There’s no official rule for what this threshold might be. In class, we looked at the different quartiles of income in the experiment group and found that the 75th percentile (3rd quartile) income was $1,221, which means that 75% of the people in the experiment had incomes of $1,221 or less.

That sounds like a good threshold to start with, so let’s go with it. We can subset the full population using that threshold and then get the average income for people who did and did not receive training.

Now we have a more logical program effect. From this, after adjusting for whether people need the training (or holding need for training constant), we can see that the training program caused a small bump in income:

It’s a much smaller effect than what we found in the experiment, but we found it in the general population without running an actual experiment, which is kind of neat.

Is $1,221 a good threshold? I don’t know. We can play with it and see how much it affects the causal effect: